The 10x Genomics Chromium Controller is a single-cell profiling technology that enables the analysis of large cell numbers at a high capture efficiency (of up to 65%). The platform allows for high-throughput analysis in a variety of cell types as well as single-cell nuclei. The workflow encapsulates cells or nuclei together with gel beads into nanodroplets (single-Poisson distribution loading). Trained core staff will prepare the libraries from single-cell suspensions submitted by the research investigator.

Single-cell data are analyzed with the Cell Ranger and Loupe Cell Browser software. 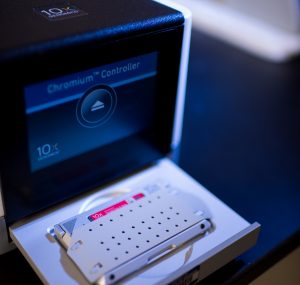 Feature Barcoding is the broad term used by 10x Genomics in order to describe any method that adds extra layers of information to cells by running single cell gene expression in parallel with other assays to gain useful biological information. Mostly this comes in two forms – looking for cells that are expressing certain proteins on the cell surface (CITE-seq) or using ubiquitous markers in order to pool different samples together into one channel of the chip (Cell Multiplexing/Cell Hashing).

Cell or nuclei samples can be labeled with a molecular tag and subsequently mixed with other labeled samples. The set of multiplexed samples are processed together in a single GEM well. After cell encapsulation, library preparation, and sequencing, molecular tag information is assigned to cells. Tag assignment enables identification of droplets that originally contained one (singlet) or more cells (multiplets). Cells assigned a given single tag are binned together, bioinformatically recapitulating the individual samples originally mixed together.

Advantages of Cell Multiplexing include:

As part of their TotalSeq antibody catalog, BioLegend offers this technology through antibody-oligonucleotide conjugates that can be used for both CITE-seq and Cell Hashing. Antibodies come in three formats that differ in their capture sequence for library preparation so pay close attention to which antibody catalog you use. These are limited to Human and Mouse samples.

If using 10X Genomics single cell 3′ GEX, TotalSeq B antibodies and/or hashtags are the best way to go!

How many cells should I target for capture and how many reads/cells do I need?

Can I have my cells checked without running my full experiment?

Yes, we offer viability only appointment slots for you to check your cell dissociation method before using experimental cells. Select “viability/count only” as your assay type when filling out the MiCores 10X appointment request form. We ask that you bring a maximum of four samples for the appointment.

How much sequencing do my samples need?

The 10X minimum recommendations are as follows:

What sort of buffers can my samples be in?

This is dependent on which analysis you would like to do.

Can I FACS sort my cells before I bring them?

Absolutely. Some things to keep in mind when sorting your cells prior to bringing them:

Can we do CITE-seq or cell hashing?

Yes, we support CITE-seq (ADT) and cell hashing (HTO) libraries. 10X Genomics refers to these as Feature Barcoded libraries. We primarily work with the BioLegend TotalSeq suite of antibodies, but are willing to work with your project. One recommendation is that if you are FACS sorting, simultaneously stain your cells with the FACS antibodies as well as the single cell antibodies.