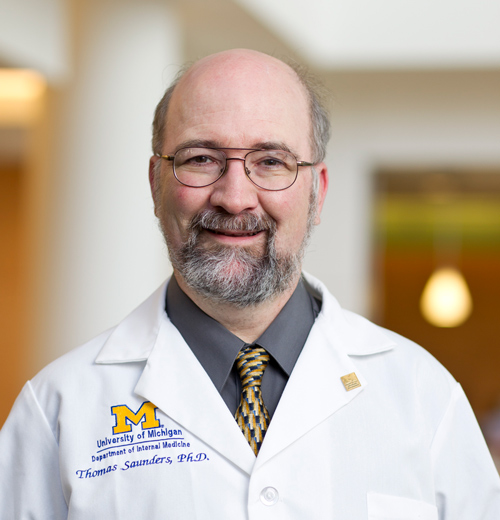 « Back to Faculty & Staff Listing

Thom Saunders, Ph.D. has served as Director of the Core since 2012 and is a Research Professor in the Department of Internal Medicine at the University of Michigan Medical School. Thom has been an employee of the Transgenic Animal Model Core since its founding year, 1989.

Dr. Saunders received his Ph.D. in Biomedical Sciences with a concentration in Immunogenetics from the University of Texas Graduate School of Biomedical Sciences. He completed his postdoctoral work at the University of Minnesota and at the Howard Hughes Medical Institute at the University of Michigan. Thom was a co-founder of the International Society of Transgenic Technologies (ISTT). He is an author of more than 100 publications; he has written 12 book chapters, and he edited the book “Advanced Protocols for Animal Transgenesis: An ISTT Manual”. He is asked to speak regularly at international conferences and is sought after as an external reviewer for grants and core facility reviews at a national scale.